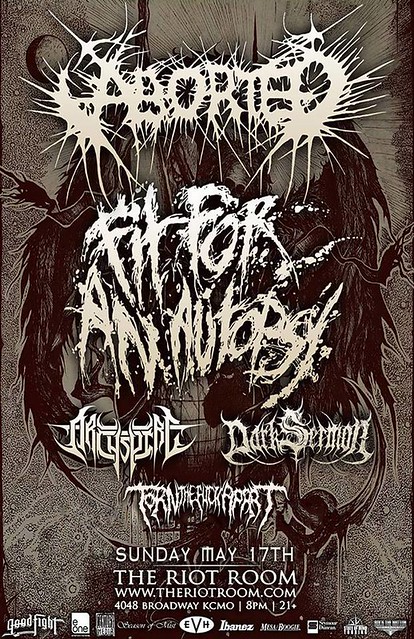 Surviving twenty years as a band in the world of underground extreme heavy metal is no easy task, yet Belgium’s Aborted have done it with aplomb and steadily increase their quality with every passing day. Despite vocalist Svencho being the only remaining original member, Aborted is now comprised of members whose credentials include time spent in bands like Leaves’ Eyes, Abysmal Dawn and God Dethroned – not something to scoff at. Through relentless touring and solid albums, Aborted has been a mainstay in extreme metal for the past few years, and for good reason.

With their 2014 album “The Necrotic Manifesto,” Aborted proves death metal and grindcore bands can incorporate elements of the modern metal sound without completely forgetting their roots. There needs to be congratulations handed out to drummer Ken Bedene for the nonstop blastbeats and double-bass kicks during breakdowns to further them from the dumb downed deathcore masses, and guitarists Mendel and Danny for exploring not just chugging riffs, but also tremolo picking – giving a sort of black metal feel to the obvious death metal slams and riffing. In a sea of similar-sounding deathgrind acts, Aborted are a breath of fresh air – relentlessly punishing and brutal, but without enough groove and melody to stand out.

If there’s one part of Aborted that’s even better than their already staggeringly quality album output, it’s their live show. Performing at max speed already, the band always keeps in tempo and is somehow heavier onstage than on album. When they performed opening for Origin and Cattle Decapitation back at the Granada in Lawrence, KS in 2012 – even without a bassist – they stole the show completely. If the addition of a bass and a lineup change is what resulted in their last album, their live show should be completely devestating today.

Aborted is performing at the Riot Room in Westport on Sunday, May 17th alongside Fit For An Autopsy, Archspire, Dark Sermon and locals Torn The Fuck Apart. See The Riot Room’s website for more info, including tickets!

View all articles by Jackson May